This is my submission for the crowd-sourced Humane, Resourced book of blogs. It is a project initiated by David D’Souza (@dds180 on Twitter) whereby a wide variety of HR & non HR professionals have offered in blogs, stories and writing.   I’m truly honoured to be part of the project and amongst such vibrant, diverse people.  The book will be available on Kindle & Amazon soon. I think it is mostly free or 99p – all surplus goes to charity…. 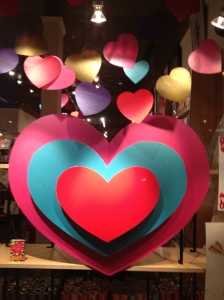 How you and I have battled over the years.

My first experience of you was in America – I was 20 (not old enough to drink legally in Illinois, one of the large, armed, humourless, policeman who raided the party informed me.)

Prior to that, I only knew your twin, Personnel.

You existed in an office so air-conditioned that, despite the temperature of 104 F outside, the immaculate Sherri had to wear a sweater. She was blonde. Efficient. Officious. I had been “Processed by HR “ merely three days before.
Inducted. Sent to get a Uniform. Allocated a locker, a lanyon and a thick employee manual that my roommate and I later turned into huge paperchains to decorate our sleeping cell.

After two days of sitting in a room with 50 + other new “Hosts” where we were bombarded with messages so insincere (These are not our customers, they are our Guests”) that my skin literally turned itchy at one point; I was sent, blinking and confused, to run rollercoasters at one of the biggest theme parks in the States.

I had never felt less human in my life.

So my act of underage drinking (did I mention I was 20?) was, perhaps, an act of expression of my humanity and individualism, HR. A rebellion against your processes and procedures and your willful attempt to de-person me. Oh how I showed you. How I laughed as I drank my illegal Bud Light, at a clandestine gathering where someone had brought an ACTUAL keg. I was sticking it to the system, HR. You took away my identity, but you could not take away my right to party!

So when I was brought back into your frigid office and processed for the second time in three days, HR, this time with a warning about conduct and an appointment with the Park Counselor to assess my drinking problem (“I’m Scottish” didn’t appear to cut it) We were already on shaky territory.

I avoided you for most of the rest of that summer, HR. You sacked my mate Austin, for re-selling his free Park access ticket on the cheap in the parking lot one Wednesday. You downgraded Scott from running a sexy roller coaster, to working in food services because he rang 911 for no apparent reason one breaktime and you deemed him to have “poor judgment” – Actually, I’ll give you that one.

You and I met again when I, hungry and grumpy after 5 straight hours standing in blistering heat and saying “enjoy the riiiiiiiiide” every 3 ½ minutes, refused to “High Five” Bugs Bunny and allegedly uttered an expletive in his direction as I passed him in the park. The fact that the boy in the 7ft inanely grinning rabbit costume had attempted to pin down and sexually assault my friend, Cathy the night before was none of your concern, HR. The rules stated Bugs was to be high-fived. And once more, my conduct was to be questioned.
Now? I was done with you.

So imagine my surprise, HR when, two years later, all graduated and bambi-legged-ready to start a “proper” job, it was you who I felt I could turn to. When did my feelings toward you change, HR? When was the moment you became attractive to me again?

You looked so good with your promises of working with people, collaborating with the business, supporting and developing staff. You forgave me my crazy student ways and the fact I had studied an MA instead of Law and offered me a Professional Career. I studied you and began to understand that What Happened In America wasn’t about de-humanising at all, but about managing and efficiently processing a rapidly changing, flexible, low-skilled workforce.

You and I had a do-over. We began to understand each other and our relationship blossomed.

We started living together – you became such big part of my life. You taught me the need for thoroughness, patience and diligence in my practice. The need to be firm and professional when I walked into the all male Ops “Lions Den” to deliver stats or meet about a disciplinary. You gave me some authority, structure, a place in the system, and an inside track on most of the gossip and the IT secrets. In addition, HR, I had the safety of a set of neat procedures to follow and policies that people should adhere to. It was all so dreamy.

But I am a flighty one, HR. My MBTI profile tells me so. I am a blue-sky thinker. Creative. Maverick. For a while you could hold me safe in your arms and I loved your structured, orderly ways, but soon, all too soon I began to feel stifled. There was a nagging doubt at the back of my mind that all this neatness and process was a myth. I felt you were lying to me HR. When the man who racially abused my friend was kept in post because there was “no-one alternative to replace him”. I knew we were in trouble.

I confess, I went to Counselling. I had to get these feelings out, this notion I was living with a fraud. My Director listened to my woes and nodded sagely. She had long since suspected this was coming. She suggested I take a break from you, HR. She suggested I go on a “project” to support “Culture Change” – just to get some distance, you understand.

How was I to know what would happen? I loved you. I truly did. I wanted to be faithful. But when I got into that room and people started talking and thinking together and it was tricky and messy and beautifully rich? Oh HR.. I was lost to you.

And then came that sticky period where we co-existed in the same house. I was mean about you, HR, sniffy and unforgiving. You, in turn, seemed to suggest I was better placed with Internal Comms. It was a difficult time. I know I only saw your bad parts, not your good. I was so taken with this new life, this new perspective, I was a blind fool.

I moved out, eventually. Been living on my own for 8 years now and the distance has been good for both of us, I think. I have come to re-appreciate (some of) your ways and you now seem to respect the life I have chosen for myself.

HR? I’m happy now. In this long-term committed relationship with OD. It’s a tricky business, defining what exactly it is between us, but we are growing and learning together and I love the fluidity and edginess of our relationship.

But I want you to know. From the bottom of my heart.
You never forget your first love HR.
X